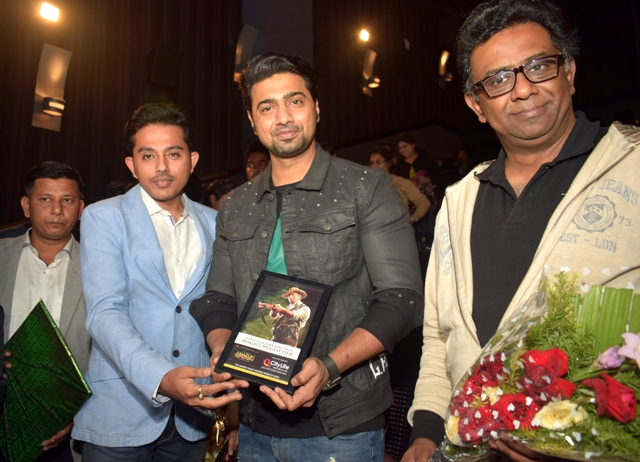 Citylife, one of the largest family stores chain in North and East India organizes an exclusive premiere show at a City Multiplex in Kolkata for their exclusive Top Buyers and NGO kids from Child Care Home from Women’s Interlink Foundation in Presence of Superstar Devand the entire star cast of the film “Amazon Obhijaan”.Mr.Anirban Kundu, Marketing Head, Citylife was also present to brief the media.

Amazon Obhijaan is an upcoming Indian adventure film, directed by Kamaleshwar Mukherjee and produced by Shrikant Mohta and Mahendra Soni under the banner of SVF Entertainment. It is the sequel to 2013 film Chander Pahar and the second installment of Chander Pahar film franchise. This film is the 100th film of the production house.

On the occasion of the event, Dev interacted with NGO kids and handed over the Christmas and New Year Gifts to them and unveiled the Winter Look Book of the CityLife brand. CityLife has recently launched their exclusive winter wear across pan India. The new winter collections at store are all about capturing trends with upbeat styling. The collection varies from Men’s wear to Women’s Wear to exclusive Kid’s Wear, ranges starts at Rs 499 only. The store promises to provide customers a one stop shop for styles at affordable prices. A customer can avail more than 10,000 designs across different categories – apparel, footwear and accessories offering the best fashion solutions for everyone, for every family.

Sharing the views on the growth strategy of the brand,Mr. Ritesh Kedia, Mr. Rajesh Vaid and Mr. Manish Kakrani, the Joint CMD and Co-founder of the brand,said, “Being the pioneers of value fashion retail in the country, we aim to take our offering to customers across the nation. We currently have a presence of over 72 stores across 62 cities and plan to expand the retail footprint further, 84 Stores by the end of Year 2017-18 and 184 stores by end of Year 2020. Citylife specifically is a brand synonymous to the growing population of global Indians who are trendy & fashion conscious but at the same time, intelligent shoppers who seek value for money. ”