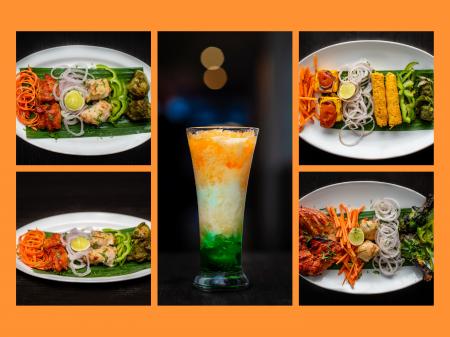 We all witness a strong feeling of being united with each other when it comes to Patriotism. Independence Day always calls for a grand celebration and of course, a grand feast is an indispensable part of any kind of celebration. Food has always been an integral part of our culture. So, to make this precious day more exciting, the “historical” restaurant, Aminia is ready to honour the 72 glorious years of Independence with an exciting and mouth-watering “Azadi Festival” menu. So, instead of using this day off as an excuse to laze in bed with a TV
remote in one hand and your cell phone in another, give your taste buds a patriotic spin and
celebrate freedom with food.

Aminia, the casual fine-dining eatery, opened the door of its most popular outlet on 15th of August, 1947 in the Futnani Chamber near the Kolkata Municipal Corporation in Sir Stuart Hogg Market or New Market, by late Abdul Qayum and Mohammed Amin. Hence 15th August seems to be always a special day for the brand to celebrate. Hence, on this special day along with our independent India, this Iconic Mughlai Brand of Kolkata also turn one more year older. To celebrate this, Aminia is all set to raise a toast to the country’s diversity by whipping up an Independence Day Special Menu, named as the “Azadi Festival”, featuring an array of tricolour-themed traditional Indian treats such as their Tiranga Kebab (Veg & Non veg), Azadi Chicken Kebab Platter and Azadi Mutton Kebab
Platter. All of these are available both for takeaway and dining.

The menu also consists of a mouth-watering and refreshing mocktail such as Tiranga Mocktail made in the tri-color theme again. In dessert, they have flavourful Saffron Milk Cake, which is surely going to give a delightful end to the Independence Day special feast. So do not miss out on this special Independence Day menu. Drop in at any of Aminia’s outlets (Golpark, Rajarhat, Jessore Road, Shyam Bazar, Behala, Barrackpore and Serampore) between
14th of August to 22nd of August and celebrate azadi by indulging in these scrumptious offerings. The price range of the Azadi Festival menu ranges from Rs. 120/- to Rs. 470/-
(+taxes).