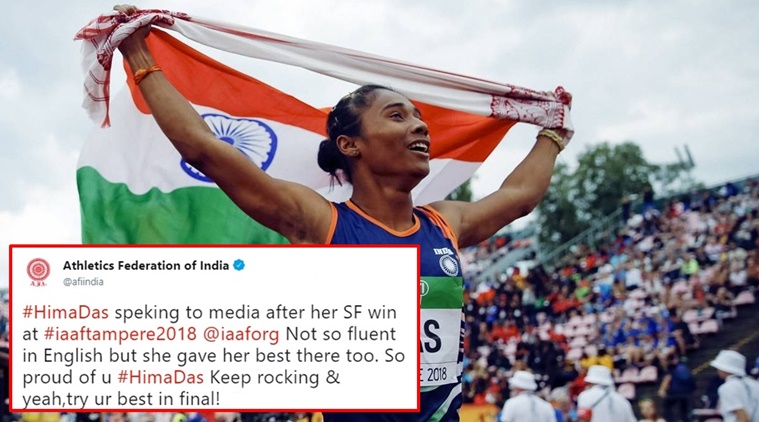 The 18-year-old Hima Das became the first-ever Indian to win the gold at a track event at any international event when she clocked 51.46 seconds to ace the women’s 400m event at IAAF World U-20 Championships in Tampere, Finland.

While the entire country and even the world rallied behind the Assam-born athlete after her historic triumph, a controversy of sorts broke out after a congratulatory tweet from Athletic Federation of India’s (AFI) official handle went viral.

This comment from the federation, ahead of her final run, has been seen from many quarters as derogatory to India’s ‘golden girl’. The replies to the tweet from AFI immediately called it out for its unnecessary comment about her English-speaking skills.

Television channels had a field day taking on the Federation for ‘mocking’ Hima and demanded an apology from AFI. While it can be contested whether the original tweet harboured any such malice in the first place, AFI did go on to issue an apology on Twitter for any feelings hurt over their original tweet.

AFI went on to explain that their intention was to highlight Hima’s confidence in talking to the English media despite her humble beginnings. The federation added that the original tweet will not be deleted because the video featuring in the tweet was a good one.

For the teenager who has been growing from strength to strength ever since her decision to compete in 400m after her initial sojourns with football, 100m and 200m sprints, this hopefully is just a brief distraction that does not affect her talent and tenacity in the long run.