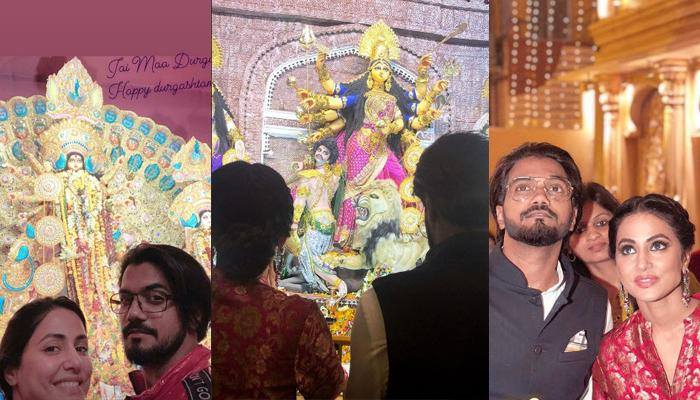 The 31-year-old actress, Hina Khan recently broke the internet when her promo teaser as Komolika was released. Yes, she will be reprising the most famous vamp that the India television has seen in Kausauti Zindagi Kay 2 (a reboot of Shewta Tiwari’s original). Hina also makes it to the headlines now and then because of her fashion statements and her online PDA with long-time beau, Rocky Jaiswal. Hina made her debut in the TV industry with the hit serial, Yeh Rishta Kya Kehlata Hai and that’s where she met Rocky Jaiswal. Ever since they have gone public with their relationship, Hina and Rocky’s pictures and videos go viral on social media. Such is also the case with her latest pictures wherein we can see Hina Khan celebrating Durga Puja with Rocky Jaiswal in Kolkata. Hina and Rocky regularly update their fans when they together celebrate festivals. Recently, the duo celebrated Ganesh Chaturthi by visiting the famous Lalbaugcha Raja. Rocky had shared the following picture and captioned it, “Laal Baagh Cha Raja. Deva Shri Ganesha. One of India’s most famous couples met on the sets of Yeh Rishta Kya Kehlata Hai.Talking about their love story, Rocky recently told a media portal, “We met on the sets of Yeh Rishta Kya Kehlata Hai for the first time where I was the supervising producer and she was playing the lead role. That’s how we met. As for what attracted me to her was her dedication to her work. I have seen a lot of actors, but she is one of the smartest of the lot” He further added, “It is almost unreal if you find a person who’s so honest all the time. She calls a spade a spade every single time. And that’s the most important thing I love about her. Besides, she is the prettiest woman in the world”. Even though, Hina’s fans knew that she shares a special bond with Rocky but it was only last year when he proposed her on the national television inside Bigg Boss 11 house. Talking later about it, Hina had said, “It was kinda sweet surprise for me as well. I wasn’t prepared for it and neither was it planned. It just happened. I usually don’t talk about my personal life but over there, you become so overwhelmed. The moment I saw him I could not control myself and when he kind of, it was not a proposal, we were in love before as well but the way he said it, I could not hold back and said it back, I love you too. It was sweet. I will always remember and cherish that moment”.