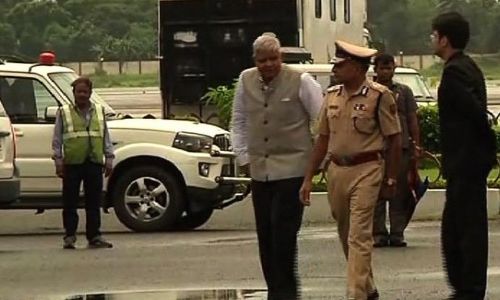 Jagdeep Dhankhar was sworn in as the 28 th governor of West Bengal on July 30.

Chief Justice of Calcutta high court, Thottathil B Radhakrishnan administered the oath for Mr. Dhankhar to be sworn in as West Bengal governor.

West Bengal Chief Minister Mamata Banerjee was present at the ceremony along with members of her cabinet like Firhad Hakim, Mayor of Kolkata and Minister for Urban Development and Municipal Affairs of West Bengal and Finance Minister Amit Mitra. Banerjee congratulated Dhankhar the newly sworn governor.

Jagdeep Dhankhar a former MP from Rajasthan and a noted Supreme Court lawyer succeeded Keshari Nath Tripathi who finished his tenure on July 23.

Mr. Dhankhar has been an MP of Rajasthan’s Jhunjhunu Lok Sabha constituency from 1989 to 1991. He joined BJP in 2003 and has been BJP’s National Convener of Law and Legal Affairs Department.