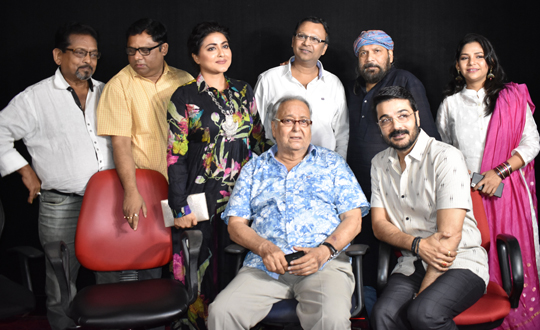 “Mayurakshi” is the seventh film of Atanu ghosh. The director of Angshumaner Chhobi, Rupkatha Noy, Abby sen. The music of Mayurakshi is second by Debojyoti Mishra. While Soumik Halder is the director of Photography and Sujay Dattaray is the editor of the film.

Mayurakshi brings on two of thye greatest names of contemporary Bengali Cinema together in two pivotal roles within a theme which centers on them as father and son. In that respect this film is expected to be an unforgettable one. In the modern world, with work pressures and financial woes mounting, isolation and stress becoming an integral part of life, most people believe that father and son bonding is becoming a thing of the past.

After creating ripples with the teaser, acclaimed filmmaker Atanu Ghosh is present of his latest flick Mayurakshi. In presence of the Soumitra chattopadhay and prosenjit chattopadhay, Director Atanu Ghosh, Actress Sudiptaa Chakroborty, Gargee Roychowdhury, and Mr. Firdausul Hasan and Mr. Probal Halder also made their presence felt at the occasion.