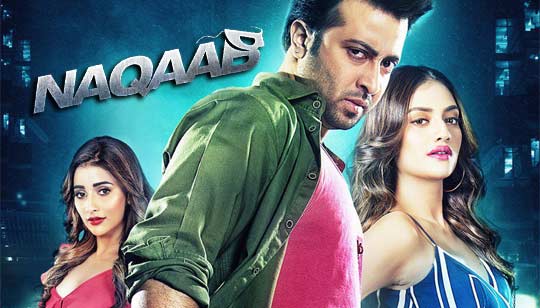 Jalsha Movies has always explored and presented a plethora of cinematic excellence for the small screen. This Sunday, the channel is geared up to showcase the Mega World TV Premiere of the recently released comedy-horror “Naqaab”.

Setting another benchmark for the industry, Jalsha Movies is all ready to telecast yet another mega starrer, just 70 days after its release. The film is a horror comedy, which revolves around Mass(Shakib Khan), a thief, who can see dead people and thus, formulates a plan to con people by performing fake exorcisms and swindle money from scared rich people, in exchange of fulfilling the last wishes of the ghosts. However, things take a turn for the worst when he becomes the prime suspect in a double-murder, because of a ghost doppelganger.

With the two leading ladies of Bengali cinema, Nusrat Jahan and Sayantika Banerjee along with the Popular Shakib Khan, this multi starrer is ready to pave its way into the hearts of the viewers on Bengal’s Biggest Movie Hall – Jalsha Movies on 25th November at 1 pm.