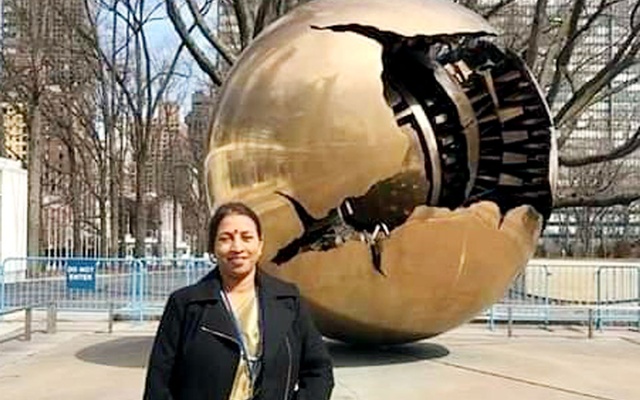 Delegates from 106 countries along with 40, Foreign Ministers participated in this meeting at the invitation of Mike Pompeo, the US Secretary of State.

On Friday, July 19 a video clip containing a discussion between Priya Saha and the President of U.S.A Donald Trump on a rather sensitive issue went viral. In that clip, Saha identifies herself as aBangladeshi and heard telling Trump: "Sir, I'm from Bangladesh … 37 million Hindus, Buddhists, and Christians are disappeared. Please help us – for the Bangladeshi people. We want to stay in our country”.

She also told that there are 18 million minority people and she wanted the President of the United States to action to help them. "My request is, please help us, we don't want to leave our country, just help us stay. I've lost my home, they've burned my home, they (have) taken away my land, but no judgment (is) yet taken please, please …"

Later in a video message, she defended her comment on the research of President of Bangladesh Economic Association (BEA) Abul Barkat. Though he refuted any claim relating his work with Priya Saha’s statement. He did accept his research found 1.3 crores Hindus disappearing in the five decades between 1964 to 2013 but denied that it is in no way related to Saha’s comment.

Several authority figures from Bangladesh are quite dissatisfied with Saha’s comment as informed by Road transport Minister Quader and Liberation War Affairs Minister AKM Mozammel Haque is one of those authority figures who were very adamant to press charges of sedition against Priya but he desisted because of Prime Minister’s order.

Bangladeshi author-in-exile Taslima Nasreen suggested Seikh Hasina give Saha protection and supported Priya Saha’s comment on twitter – Priya Saha may be used wrong word 'disappeared', but the number of missing people is, of course, many millions. Muslim fanatics are furious at her. Hasina should provide Priya Saha security. Hindus were 29.7 of the total population during 1947,they are
now only 9.7%. Not alarming?

Prime Minister Sheikh Hasina's ICT Affairs Adviser and son Sajeeb Wazed Joy accused the US embassy of Dhaka deliberately choosing Priya Saha as "They picked Priya Saha because they knew she would make this outrageous statement," and he labeled her comment as "the one that had an ulterior motive". He also said in a Facebook post:” The only logical outcome of making such a claim to the US President is to build demand for a military intervention in the region on humanitarian grounds.”

Joy believes that the Us Embassy should have refuted such false claim but they did not do as “ It is no secret that the US Embassy is decidedly anti-Awami League. They have always hosted Jamaat and war criminals at all their events. With their support of Priya Saha's statement, they now appear to be plotting a direct takeover of our country.”

He also said that he hopes Priya’s comment may not have a drastic consequence for Bangladesh as ”Fortunately for us, President Trump and his administration have a very different policy of non intervention in foreign affairs. They are also not so stupid to believe such a ridiculous claim.”

Now the speculation is would US President Donald Trump take such steps or not.