Title launch of a murder mystery 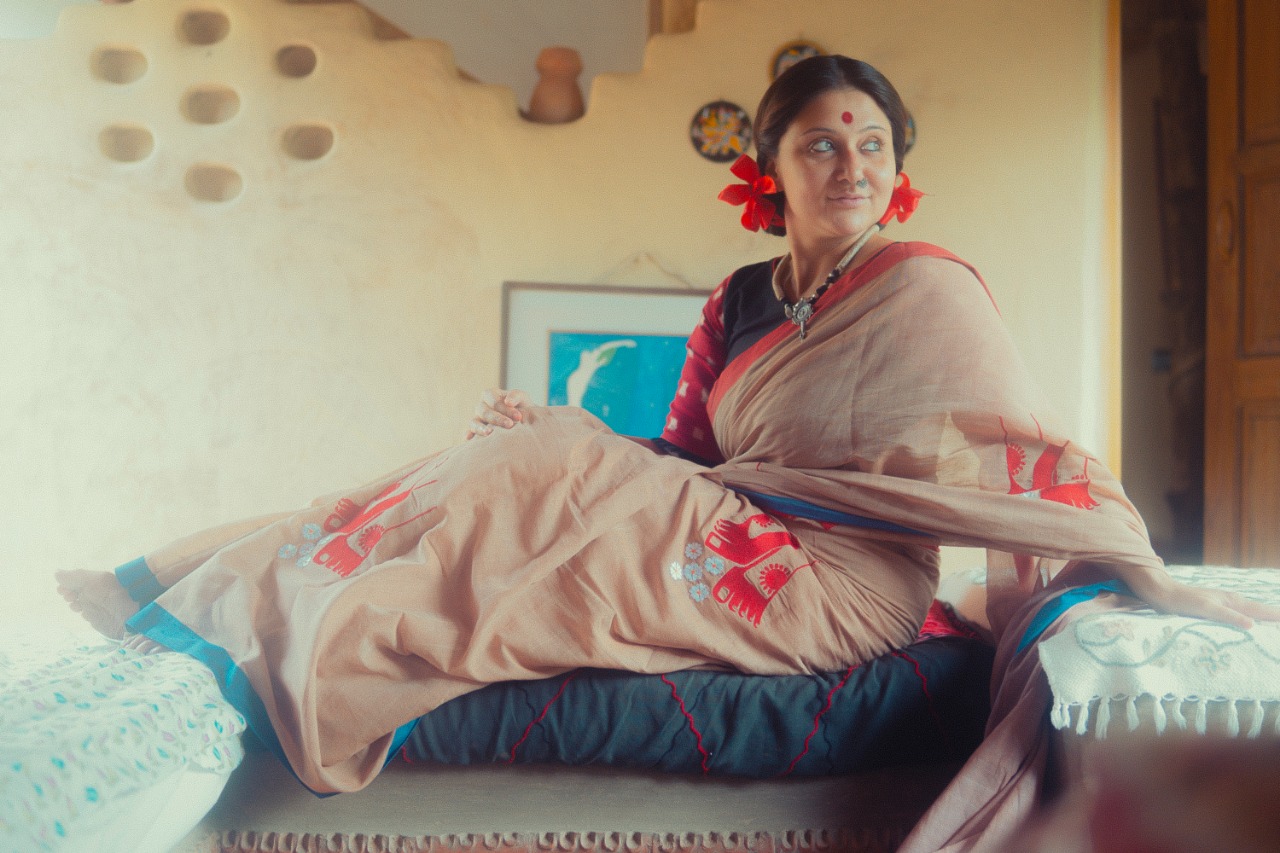 PARAMA
“Saree”- this word itself holds a lot of grace and aristocracy. Dating back centuries, saree is one of the oldest forms of clothing. It is one of the prime clothing in India varying in its style from
place to place. In spite of the invasion of the western clothing style in Indian culture, nothing
could stir the exorbitant position that saree holds in an Indian woman’s heart.
The fine draping style of saree represents power, elegance, and womanhood and with the
perfect pair of a blouse, the attire becomes as classy as sophisticated. Whether it comes to
Draupadi’s “Bastraharan” in Mahabharata or Rani Laxmi Bai’s story from the war, every saree has
a story to tell and who would understand it better than –“Parama”- which tells stories of every
nook and corner from Kolkata’s everyday life.

Parama Ganguly, who called off her 10 years long career as a lawyer to expose the “Story-telling”
power of saree, launched the brand “Parama” 4 years ago. Since then, the brand has occupied a
special corner in every woman’s heart. The brand focuses on traditional Indian clothing that
includes Saree, Blouse and Dhoti representing Kantha, Jamdani, Batik and other traditional art
forms from parts of Bengal as well as other places of India. The brand is well known for
portraying the swarming culture and mundane beauty of Kolkata through the loops of its
threads. Presently the brand has more than 100 women working in its Kantha Batik unit in
Shantiniketan and around 35 in its stitching unit in the outskirts of Kolkata. In Parama’s words
“My work is narrative based and all my clothes have stories to tell. Through threads, needles,
and weaves, I tell stories of every day, stories from Calcutta and she is my biggest muse. My
company is 4 years old and the love for mundane and love for simpler things in life is what makes
Parama”.

A special part in a Bangali’s heart is saved for Durga Pujo. A year of waiting for the five days
celebration should be eventful enough to cherish the memories for one whole year till another
Durga Pujo arrives. And of course, the outfits for Pujo should be up to date with the current
fashion trend. It is widely known that women are crazy over clothes, bags, jewelry, and shoes
and for “Bangali Ramanis”, during the Pujo, the streets of Kolkata become the ramp, where they
are the show stoppers.

After many vigorous pieces of research, trials, and efforts, they select the clothes and jewels
suitable to wear during the pujas. But nothing can beat the gracefulness that a sari exhibits when draped on a woman. And For Bengali women, a 90s saree from mother’s closet is always more
fashionable than a sheer dress from a designer’s collection. The Saree becomes deadly when
paired with the right jewels and matching blouse. So during Durga puja saree is must to
complete the puja look.
Tradition is the cardinal part of “Parama” so why not delineating the “biggest festival of Kolkata”-
Durga Puja? Yes, you read it right. Parama is launching its Durga Puja collection and it’s the
kaleidoscope of light, sound, color, and smell of Durga Puja.

The Mahalaya Themed Blouse and Saree:

No matter how modernized Bengali’s become, every year they never miss to set up the alarm in
the pre-dawn hour to listen to “Mahisashurmardini” aired on the radio and with the Chilling
voice of Birendra Krishna Bhadra and the conventional smell of “shiuli”, the inception of the
Maha-puja happens. Parama has incorporated every element of puja in the Mahalaya collection
like Shiuli, Lotuses, and Dhunuchi to give the attire a ritualistic touch.

Before few months of Durga Puja, the Potters of Kumortuli starts making idols or “Thakur
gowra”. The most fascinating part about it is that the months of hard work and sleepless nights
washes out into the water but no one remembers their effort. The same way, every character in
Ray’s film Joy Baba felunath draws people’s attention but only Sashibabu getsunnoticed.
Inspired by “SashiBabu” and his making of ma which remained unfinished, Parama has
incorporated an artist’s brush and the flawlessly alluring face of the goddess into her saree and
blouse collection.

Devi:
Whenever we hear this word a picture of an idol of woman, colored in power and affection
comes in our mind. Inspired by a hand-drawn poster for Ray’s film “Devi”, Parama made this
collection of handwoven khadi by cotton sarees with Devi poster hand-embroidered on it and on
the blouses.

Kumortuli:
“Kumortuli” is known as Kolkata’s potter’s colony and a place that puts life into the idols. Every
year, before Durga Puja hundreds of DSLR’s flashes to capture the perspiring moments that the
potters spend to make the idle flawlessly fierce and beautiful. Every “goli” of Kumortuli speaks
the story of the immense hard work of an artist.
In this collection, Parama has translated the entire maps of Kumartuli along with Goddess being
made on the sarees and blouses. It is a tribute to the “Artist Para” and “their Art”
Apart from these collections, Parama also has some new attractive additions like Kanthas and
Jamdanis. The Kantha work on double-ikkat telia sarees and on santipuri weaves and new motifs
on Jamdani will not fail to capture eyes. Hand embroidered vintage blouses, the recent addition
to the collection is surely going to be a trendsetter for Durga Puja.
So now you don’t have to scroll through the online sites or search for the perfect collection in
the stores because “Parama” is here to give you the perfect unique traditional look for the pujas.
So for booking your perfect pair of Saree and blouse please call at 9830459687.
“Subho Sarodiya”